In the last 48 hours, shameonfast was trending on twitter because Fast University released Disciplinary Actions Notice against those students who were involve in making meme on Fast University and their Management on a private Facebook group.

This action was taken Lahore campus of by FAST University. They issues warnings to 25 plus students who shared memes on the university.

This news spread like a fire all over social media. People started sharing their opinions with #shameonfast.

The University took those memes so offensive that they set harsh punishments to every specific student making memes according to them “defaming” the institution.

Here is the particular notice by the institute which is running all over the social sites. 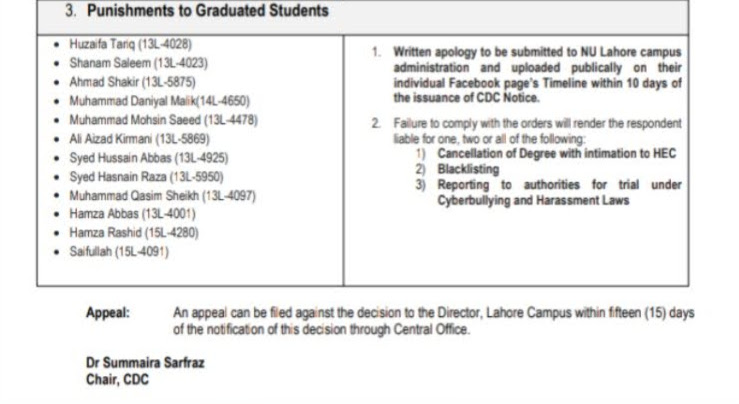 This obviously triggers the students who got extremely angry over this action. Students took over Twitter to raise their voice against these punishments due to which #ShameOnFast ranks on the Top Trending in Pakistan.

The Actions Notice have very strict punishments like for the student who are graduating this year won’t be getting degrees, lowering grades, some students have to clean the litter from the campus lawns, etc. Even expelled some students of Lahore campus.

In my opinion, this is really worst and unjust to all the candidates who worked so hard. The FAST University could give warnings to the student before giving such horrible punishment which can destroy their future. // fast university in karachi

I think that institutes have no right at all to control the social media activities of their students. It is student’s right to express their concern whether they use memes or any other medium for this activity.

Reactions on the Step taken by Fast University

Students are furious and enraged that how the management can threaten the students?!

Someone is generally concerned about the future. // fast university in karachi

This one is so on point

Here comes the mental health of students which is destroying by this notice and can lead to suicide.

Journalist Ali Moeen Nawazish also support the students and is against to the decision of Fast Universities.

No action taken on Harassment, but on making memes they are expelling students!

This is really unfair to the students. I hope they get justice to what they really work hard for.  //fast university in karachi

Fast University is one the renowned and professional university with its branches in Karachi, Lahore and etc. But this kind of behavior shows how pathetic there management is. The Meraki Condemns their act of punishing students just because they shared their experience vai the medium of memes.

Melody Of A Tear: A Review

Sense Me by Annum Salman

Your Past Is Gone

Transformed from broken to whole: A real life story

ABOUT US
A soulful domain initiated to serve your creative, artistic, and critical cravings. A single sphere that welcomes the love of literature, aiming to bring forth raw imaginative & artistic sparks of people. Words to tackle and raise psychological awareness & mental help.
Contact us: [email protected]
FOLLOW US
© All Right Reserved -The Meraki Magaine
Email: [email protected]
This website uses cookies to improve your experience. We'll assume you're ok with this, but you can opt-out if you wish. Cookie settingsACCEPT
Privacy & Cookies Policy

Any cookies that may not be particularly necessary for the website to function and is used specifically to collect user personal data via analytics, ads, other embedded contents are termed as non-necessary cookies. It is mandatory to procure user consent prior to running these cookies on your website.

115 million mobile users data was stolen in Pakistan Yet no...

The novel coronavirus and the world – A global war